Taking coronation chicken for Harriet and tuna sandwiches for Hetty I went to Canterbury.

Hetty was doing a study for a student at Canterbury University. Hetty got a certificate, a bag, a balloon and chose a duck for her time and effort.

We took our picnic and sat by the river. There were a group of possibly Spanish students doing cartwheels. Hetty watched and tried cartwheel arms. They were quite noisy and Hetty did a good interpretation of the noises they were making. I have not laughed so much in ages.

This evening we went to Mike and Pippa's and watched the opening of the Olympic games with Sarah, Nigel and Caroline. Rowan Atkinson as Mr Bean was excellent with his accompaniment to Chariots of Fire. Good thing we had fine food to fill in the rather long parade. None of us one the sweepstake as to who was going to light the cauldron. That was cheating a bit really. 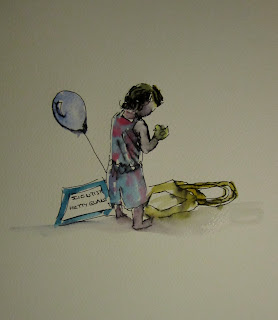