To Sarah:- You must have very smooth potatoes and no it was not jam sugar.

Tim took advantage of the fair weather and fixed the roof on the chicken house. Its third new roof in 25 years. I think the chickens will be delighted to be able to sleep in the dry tonight.

We went over to Si and Lesley's to look at the MG. Steve and Vivien were there collecting a shoulder of lamb. The draw of the MG was too much to resist. A charged battery was found. The starter motor seems to be uncooperative. Good thing there is a starter handle - shame you need to loosen the bumper to use it. Vivien and I, later joined by Lesley who was busy making pizza, looked on as the boys tinkered and spoke in a foreign language. It did start a couple of times and sounded beautiful but seems to have a problem with keeping going. Si was on the end of the starter handle and may be in need of some pain killers for his back later. Steve was in charge of a can of 'Easy Start'. Good thing the weather is not conducive to trips out. 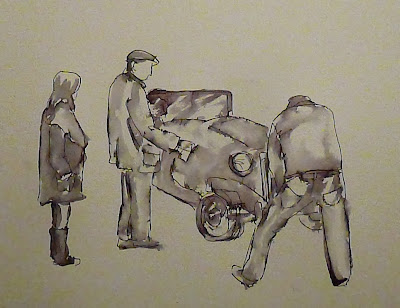